........One of the paintings which she left with me before leaving India was the scene of the servant woman asking Peter “Are you not one of them” and Peter nervously denying, “No, I am not”. It still hangs in my room. The scene depicts a modern tavern where men sit and drink and behind a woman Christ is arrested and led away. It is a powerful portrayal of how a woman unravels the humbug of men. 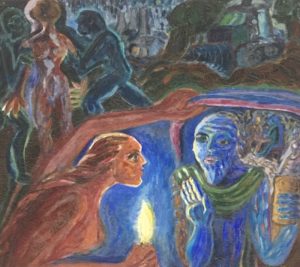 Another mini-image of Caroline which I bought from her is a bronze version of the granite The Birth of the Divine Girl. This has five figures and at the centre the birth of a girl is being celebrated. Besides the several possible interpretations it expresses basically the experience of the sculptor who releases the image hidden in the rock. And more explicitly her Lion Lady image is an embodiment of the artist’s shadow that has been made conscious and now becomes a source of renewal and creativity.

With her European Christian background Caroline exposed herself to the Indian epics and mythologies and found an echo in her and the result was her series of paintings on Sita’s Way of the Cross. This set was with me and I left behind in Satya Nilayam College, Chennai and it is still displayed in their academic parlour, though the younger generation of students may not recognize them.

Caroline says that it was the turning point in her life. It was a rediscovery of the tradition which is symbolized by the discovery of Sita, the heroine of the epic Ramayana. Here it is her western background which enabled her to discover the role of suffering in the life of Sita, which even the traditional Hindus would not have articulated this way – the crucifixion of Jesus in Sita’s “fire test.”

It is significant to note the type of Indian mythological figures that inspire Caroline – Yoga Narasimha, Lion Lady, Hanuman, etc. Her series of 46 water colours The Heart Garden in fact explores the heroine’s inner world, unfolding her own pages of painful memories, gradually getting transformed into self-knowledge, a process of discernment through which she could reconcile the opposites. Significant are the images of the wound, man’s fear of the woman’s passion, the tenderness of the Lion’s Jaws, Touching the Jaws and the victim comes to her violator. The journey is physical, emotional and spiritual.

Caroline was also part of a small group of women (along with Gabriele, Tulassi, Vijaya among others) at the initial stage of her stay in India, who brought out a newsletter, Yātrika, connected with women’s creativity. I still have some old issues where Caroline has written short articles and interviews. An Artist has to speak out at times using other forums to articulate, defend and to make known to the wider public one’s art works. This is part of the storytelling which builds community and enables all of us to participate. (go back)

We use cookies on our website to give you the most relevant experience by remembering your preferences and repeat visits. By clicking “Accept All”, you consent to the use of ALL the cookies. However, you may visit "Cookie Settings" to provide a controlled consent.
Cookie SettingsAccept All
Manage consent

This website uses cookies to improve your experience while you navigate through the website. Out of these, the cookies that are categorized as necessary are stored on your browser as they are essential for the working of basic functionalities of the website. We also use third-party cookies that help us analyze and understand how you use this website. These cookies will be stored in your browser only with your consent. You also have the option to opt-out of these cookies. But opting out of some of these cookies may affect your browsing experience.
Necessary Always Enabled
Necessary cookies are absolutely essential for the website to function properly. These cookies ensure basic functionalities and security features of the website, anonymously.
Functional
Functional cookies help to perform certain functionalities like sharing the content of the website on social media platforms, collect feedbacks, and other third-party features.
Performance
Performance cookies are used to understand and analyze the key performance indexes of the website which helps in delivering a better user experience for the visitors.
Analytics
Analytical cookies are used to understand how visitors interact with the website. These cookies help provide information on metrics the number of visitors, bounce rate, traffic source, etc.
Advertisement
Advertisement cookies are used to provide visitors with relevant ads and marketing campaigns. These cookies track visitors across websites and collect information to provide customized ads.
Others
Other uncategorized cookies are those that are being analyzed and have not been classified into a category as yet.
SAVE & ACCEPT